This story is two years old, but it is still applicable to lots of other things.  To begin look at what the population of Detroit has been doing for the last 100 years: 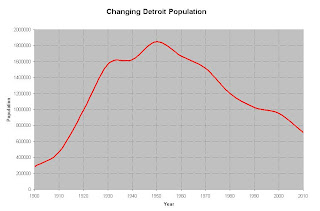 Detroit has been a classic bubble which peaked in 1950 and then busted (and is still in the bust stage).  For the first few decades of the bust, the flight appeared to be just to the suburbs, but in the last couple of decades, the population of the region has been declining as well.

The demographics of Detroit have switched dramatically as well. At its peak in the 1950s, Detroit was a white town (84%).  While the bust has been fueled primarily by "white flight" (Detroit has lost 1.5 million white people since 1950), between 2000 and 2010 the population of almost every group declined, so everyone realized that Detroit is not a place to live.  The only group that saw an increase in population, Hispanics, only had a very minor increase.

So, imagine for yourself what the change of losing 55% of your population.  Think of half of the homes in your neighborhood, half of the apartments in your complex being empty.  Always.  Its pretty easy to see why a home in Detroit can be bought for $5000.

With the decline of population of this magnitude, the number of school children will decline as well. Hence the need to close lots of schools.  In our city, there was a big debate about closing 3 elementary schools last year.  You would have thought that the government was shooting the dogs of random families with the rancor that was going on.  Face it, there are less kids, so there is less need for schools.  Massive population changes like Detroit has had compound the problem because you can't close schools gradually.  And since they are funded through the property taxes of the homes that are vacant and abandoned, there is less money each year.  But every school still needs to have some minimum level of funding for maintenance. 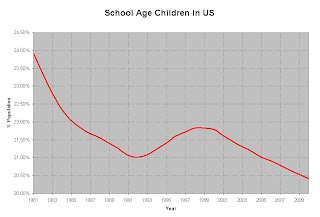