What caused the 90s reduction in gun deaths? - Part 2

In Part 1, I started my explanation of Linoge's graphic. At the end of Part 1, I basically left off showing that the trends of death by cut/pierce and bludgeoning was similar to those by firearm, thereby discounting that the Brady Bill or AWB had anything to do with the decrease in firearm deaths. In this post, I want to tackle an issue that Joe Huffman brings up in Linoge's comments.

Joe says:
"Does "Firearms related deaths" include justified homicide? If so then you are being a little too generous to the anti-rights people."

Basically, if we break down the firearm deaths we find that two categories account for 95% of them, homicides (not legal intervention) and suicides. So let's look at those in comparison to other forms of death. First homicides: 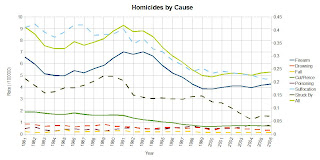 Dashed lines use the righthand scale, and solid lines use the left hand scale. All data is in rate per 100,000. If you notice, the top three methods of homicide - firearms, knifes, suffocation - have almost identically shaped curves. That means whatever is affecting one is affecting all. Anyone care to explain how the Brady Bill or the Assault Weapons Ban prevented people from strangling others? I just can't do that kind of mental gymnastics. The struck by/against curve is somewhat similar, with the overall basic trend (high near 1990, then decreasing until a leveling off in the last few years).

Now lets look at how closely it is correlated. I graphed the year over year percent change in the rate for the top three causes of homicide:

If you don't quite understand this, I apologize. Let me try to explain. The lines are showing the magnitude of change from the year before. The fact that all three curves are tracking so well (and in some cases have nearly identical year over year changes) means that these three methods of homicide are highly correlated. Since homicides account for about 45% of the firearm deaths each year, for the Brady Bill or AWB to have had any effect, there must have been some sort of Knife/pointy Stick Bill or Assault Pillow Ban at the same time to get such good correlation.

This is actually the most interesting to me of all. Firearm suicides (being about 65%) of all suicides tracked fairly well with overall suicides until 2000 (fairly level through the 80s and then a decrease in the 90s). Since 2000, firearm suicides have continued to decrease, while overall suicides have increased. In fact, all forms of suicide tracked the overall rate until 2000. Now it appears we are seeing rising suffocations, cut/pierce, and poisonings. To me this looks like substitution. People still choosing to commit suicide, just via a different method. And during this entire time, gun availability in the US has been on a steady increase. The trend in decreasing firearm suicides started in 1990, 4 years before the Brady Bill and AWB. It starts another increase in 2000, again 4 years before the AWB expired. If either of these affected the suicide rate, you could easily argue that all it did was transfer the gun suicides to drowning, fall, and suffocation which showed jumps in 1994 and then decreased at roughly the same rate as before (but from a higher level). Except suffocations which has continued the increase. So what good is a bill that decreases gun suicides only to have other forms of suicide increase and offset the decrease? Again, even though gun availability in the US rose each and every single year!!!!

The other point that this graph shows is that you can't really lump suicides in with homicides to do analysis. For homicides, the top 3 or 4 methods were highly correlated. Suicides shows no such correlation. Ergo, eliminating one method only changes the method used not the rate.

And if you thought I was done yet, you're wrong. Guns don't just kill people, they injure people too (as do knives, cars, sticks, and drugs). So on to Part 3!
at 9:00 PM