When the Wife Forgets Dinner ...

Coming home from work today, my wife was really excited. The good news was she (with the help of our small human units) was able to get the house all clean. Everything picked up, no random train pieces or naked Barbies anywhere.

Then she broke the bad news: "I haven't started dinner yet." OK, that isn't so bad, except we were suppose to have ham and potatoes. The ham could be cooked up in a pinch (or eaten raw - not really, since it was smoked) but the potatoes were a different story. Since we were suppose to take our kids swimming tonight, that meant we didn't have the hour to wait while starch laden land apples slowly baked.

"How about ham and cheese sandwiches?" I said.

"We had those for lunch." the eldest said.

"Well, I'll cook them on the griddle instead of the microwave so that they are different."

"One problem, look what the destructo-baby did to the half-a loaf of bread?"

I sorted through several mangled pieces of Wonder goodness and was able to salvage enough for sandwiches for the kids. I figured that the melted cheese would help hold things together, maybe. That left the adults. My wife conjured up some tortillas and I was thinking we were in business.

Buttered bread began to toast on the griddle. Next problem, there were no cheese slices. Only the remnants of a bad of chedder and one cheese stick. I managed to stretch the shredded cheese out amongst the kids sandwiches. And after melting one of the non-heat resistant spatulas (and adding some petroleum products to the sandwiches - hey, it will put hair on your chest), I had the kids meal done.

Now for the grown-ups. We were much too mature for just a sandwich. We needed a sophisticated meal. The tortillas went down first, buttered on one side. Then I carefully pulled the string cheese stick apart and divided it between the two (sting cheese doesn't melt very well). It looked rather pitiful so I scoured the fridge and found about a quarter full container of cottage cheese.

"That has cinnamon in it." my wife warned me.

Too late, a couple of heaping spoonfuls, and then topped it off with a slice of ham. 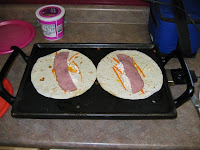 See the magnificent creation! OK, I'll admit, it isn't as cool as one of Brigid's creations but still, it worked. Fifteen minutes after I was home, we were sitting down at the table to eat!
at 5:39 PM