In Part I, Part II, and Part III, I have disputed mikeb's claim using only the dataset that he used, albeit, I have updated the numbers to 2006 and looked at states individually as opposed to as a whole (the only change was I added DC). From this point forward, I plan on using the full 50 state dataset with the District of Columbia.
So, to begin, let me address the DC issue. It is frequently left out of gun control statistics without any explanation. From the tables I showed in Part III, we see that DC frequently is an outlier for the dataset we are looking at (2006 Deaths of Women). For this limited dataset, I don't see the logic. It actually helps support mikb's position for suicides and accidents (since DC has no female firearm suicides or accidents). But there is that homicide number, although I showed that even though DC has a homicide rate higher than 8 of the high gun states, adding it in to the low gun states doesn't change the values much (and it is more honest to look at it this way). So by leaving DC out, one truly is cherry picking the data.
What reasons would there be to leave DC out? To begin, unlike all of the other states, it is not a state, just a city. So where a state is a mixture of cities, subburbs, and rural areas, DC is only a city. But one could also make an arguement that Rhode Island and Conecticut are very nearly just cities. Furthermore, someplaces like Massachusetts have a population dominated by their major city. Therefore, I don't buy that excuse. If you are going to use that excuse then at least you should include the DC numbers in with Maryland or Virginia. Maryland has the lower gun ownership so I would say it belongs there. And you would get something like this:

As you can see, the numbers don't change much (but you can go to sleep at night knowing you didn't purposely obfuscate the data).
So lets see how mikeb's hypothesis holds up when we look at the entire United States. All of the charts show the rate on the y axis and the states on the x axis (denoted by their ownership percentage). First, women firearm homicide rates: 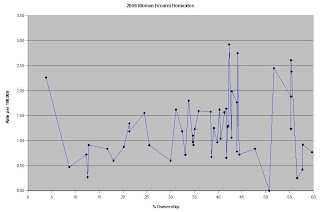 Wow, is that a trend or a drawing of a set of shark teeth? Seriously, how can you say there is a trend. Sure you can draw a line in there, but you could draw a whole bunch of different lines that would all have the same average delta between the point and the line. Real quick we see that on the high gun side, there are five states with women firearm homicide rates above 2. SC, LA, AL, MS, and WV. Is it a coincidence that four of the five are in the south (and WV is pretty close to them)? The only trend I have seen in this data is that as the number of datapoints increases (from 2 to 17 to 51), the predicability of the hypothesis decreases (in other words, it is wrong). If a hypothesis were correct, then increasing the datapoints should increase the predictability. Frankly looking at this graph, if a state increased its gun ownership to 60%, there is no telling where they would be (although it is pretty safe to guess it wouldn't be above 2.5).
Let's move on to suicides: 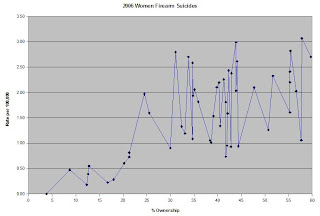 OK, there might be some hope for the hypothesis. There appears to be a threshold around 2o% ownership. Below this, the number of gun suicides decreases dramatically (duh...if they don't have guns they can't kill themselves with guns). Above this threshold there will be a gun suicide rate of at least 0.75. What this tells me is the place to do some further study is around this threshold with respect to other methods of suicide (perhaps 20% is universal - if you only allow 20% of the bridges to be jumped off, will people abandon trying to jump off of them). After this threshold, there is no predictive ability again, the datascatter is as chaotic as homicides.
Finally, we have accidents: 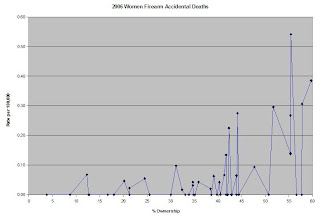 This is the most intersting of all. There appears to be a threshold again (like suicides) at around 40% where the accident rate never goes above 0.10. However, above 40% there are several states that still have a 0.00 accidental death rate for women. In general, you can see that accidents increase above the 40% threshold, but not universally (again, this is a no-brainer). Remember the qualifier I had about training and usage. What really needs to be examined here is the 0 rate states. Why do low gun states like MA, CT, and RI have no accidents? My hypothesis would be since they have driven out the majority of gun owners, only the most die hard (competent, trained, etc) continue to own guns legally. They are the ones handling them with expert care and going to the range regularly to hone those skills, hence no accidents. The non-criminals who own "illegal" guns never get them out (for fear of the law) hence don't have a chance to have an accident. Accidents happen through use, not ownership. Likewise, why are Wyoming and Mississippi high on the accident list, but Utah and Wisconsin are not? All four have high gun ownership rates. Once again, one would have to look at two things which are beyond the scope of this study: absolute number of firearms (not just number of owners) and usage of firearms.
This last point brings up an interesting data error. All of this dataset is based on firearm ownership rates. I previously discussed some of the inaccuracy inherent in the reporting of firearm ownership. The sorting of states by total firearms owned (hence chances for a firearm to cause harm) might produce a very different result. For example, based on JayG's Friday Gun Pr0n (for non gunnies, its OK to click the link, the only nakedness you will see is metal), I am fairly certain that he has an armory that could safely be used by most of western Massachusetts, with some to spare. However, I have a relative in high gun ownership Utah, that only has a single firearm. Since this study only looks at firearm ownership, they both count the same. I don't know that there has ever been an attempt to determine how many guns are in each state. Think of gun owners as the Senate, and guns as the House of Representatives: JayG would be California (sorry for the insult) and my relative would be Alaska. I do suspect that any survey would be about as accurate as the ownership percentages for the same reasons: people don't want to tell you. I may later do a hypothetical based on gun repressed states hoarding more guns per owner than free states. But for now, ownership will have to suffice (with the caveat that we remember in the end result, our numbers have error in them).
To summarize, as we have expanded out the data set to all 50 states and DC, we find that mikeb's hypothesis breaks down even further, for all areas. But I am not finished yet, not by a long shot (I've only made 4 tables and 3 graphs). On to Part V.
at 11:51 AM