Well, today I finished painting the brick on the outside of the house. It had gone so well up till now that something had to happen. To begin, the brick facade was built with a brownish orange brick that had been chemically treated so there was some white splotches, black splotches, and basically made it a rather ugly brick. I wanted red brick. 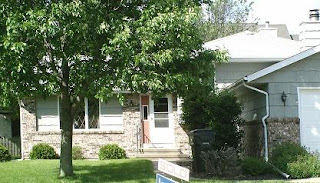 I searched the internet over for some information and finally decided on a few things. 1) While using the spray gun would cover the whole thing in about an hour, I didn't want it to look painted. Painted brick is tacky. So, I would have to paint each brick individually. 2) I didn't want the paint to be flaking off. For this I would need to only paint without direct sun on the brick and when it wasn't too humid so the paint could soak into the brick. Then, to finish the whole process I would have to spray a clear coat of waterproofing.

Well, as I started the last sections this morning, my daughter was out riding her bike. And she fell and came screaming to me. Turns out in her fall she had ripped her middle fingernail completely off. We went in side and I washed up and then tended to her (no sense in getting paint all over her wound. One of the worst things about being a parent is having to put wound cleaner/protectant/antiseptic on a fresh wound. Your child screams bloody murder from the pain, and you know your the one who caused that pain. It is for their good, but that doesn't make it any easier.

After she was calmed and bandaged, I went outside and found my other daughter sitting by the bucket of paint, covered in paint. She had also managed to thoroughly coat 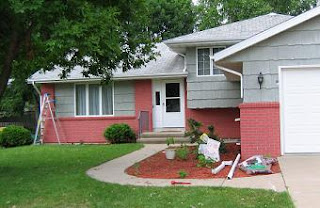 a section of the facade, brick and mortar. Panic!!!! I picked her up and handed her off to my wife (I had already taken care of the blood so she could deal with the paint). Then (since the paint was still wet), I got some rags soaked and madly wiped the paint off of the mortar joints. It worked. And that was our stress for the day.

The painting of the brick is done so you can see the before and after pictures: we're still going to redo the siding, be we now have a red brick house.
at 4:23 PM