The House is Done!

Well, almost. I haven't remodeled the bathrooms and a couple of closets yet, but for all intents and purposes, my family's two year journey to remodel the house we bought. The major project this year was the exterior. Below is a photo taken shortly after we bought the home. The front had a combination of mottled brownish brick facade with gray wood shake siding. The sides and back were gray steel siding. One of the goals that we had were to make the siding all of one type. We also didn't like the color of the brick since it basically looked dirty all of the time. And gray always looks dirty, too! 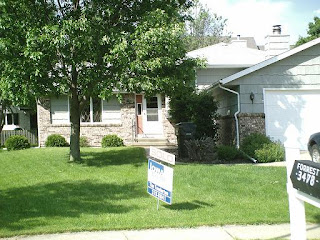 The Preparation
Looking around our neighborhood, there aren't a lot of houses with contrasting colors. There is a blue house with white trim. A couple of yellow houses with red/maroon trim. And a white house with green trim. So, we wanted to definitely add some contrasting color. We chose white as our trim color (soffits, windows, etc.) and decided to do the outside corner siding pieces in white as well to help accent the house.

Next, we looked at some various colors of siding and chose one called Stone Clay. It is a muted brown to tan and helps match the brown earthy tones that permanate our neighborhood, without looking identical to them. We selected a 5 inch dutch lap profile to be distinct (no one else on the street has dutch lap although a couple of homes on the street behind us do).

Finally, the brick had to change. Masonry is an expensive job to replace. I thought of painting the brick to get it a different color. The issue was, I didn't want it to look painted. Which meant instead of using the spray gun and taking an hour to do all of the brick, each brick would have to be painted by hand in order to keep the mortar joints their natural color. After painting several hidden pieces of brick, we settled on a color Sienna Red. We thought the brick red color was a good contrast to the Stone Clay and White and would help to accentuate the house. Also, we planned on laying down a red mulch in the flower beds and get rid of the gravel covering. All of this was done by April of this year and the fun part really began.

At the beginning of the year, we had budgeted an amount to get the siding done. After talking with some neighbors on their homes, I figured that we could hire it out and come in about for what we budgeted. But, my wife and I aren't like that. We like to squeeze as much out of our budget as we can. So, I priced out the materials myself and came up with a figure that was about 1/3 of the budget. So we talked about it and decided to replace the windows as well. We would install everything ourselves, and the total cost left about 1/3 of the original budget for any contingencies. For anyone about to embark on a home remodeling project, contingencies ALWAYS happen. If you haven't put room in your budget for them, you are going to be hurting later. If you have, and the contingencies are not as large as expected, you can always buy guns and furniture.

Painting
After our trip to Disneyland in May, I started off by power washing the brick. It is important to wash brick before painting it since the paint helps to seal up pores and if there are bird droppings on it, then you have basically sealed these onto the brick. Depending on the type of bird droppings, there may be chemicals that combine with the paint or form on their own to eat away at the brick. Power washing is relatively easy and only took about 1 hour. The next part was letting the brick dry for about 3 days. We had a good stretch of sunny weather to help us out. You want the brick dry so that excess moisture isn't trapped underneath the paint. This could surface later and bubble up the paint.

By Memorial Day, I was ready to paint. I started with the far left section of the garage and painted all of the brick. Going on wet, the paint looked like a satiny pink (it was suppose to be a flat Siena Red). After that section was done, I called my wife out and had her look at it from the street. She looked hesitant, and I said "I know the wet stuff looks pink, but when it dries and the sun dulls it out, it will look red."

"If you want to change the color, now is the time to do it, since I calculated it is going to take me 20+ hours to paint it brick by brick. "

And I did. I worked on it about 2 hours a day when I could and was done before the end of June. A couple things to keep in mind. I didn't paint it in the direct sun. I wanted it to dry in the shade. So on sunny days, I would paint sections in the morning and then other sections on the other side of the house creating a jigsaw pattern of "new" brick and the old brick. Also, I didn't paint when it was raining or threatening to rain. During this time, I only had one major mishap when my youngest daughter found the unattended paint can. It was in an out of the way place, and unless you know to look you probably won't find it.

The advantage to painting so early in the process is I didn't have to be careful around the old siding. It was all going away. I did have to watch myself around the garage door and the front door since they were keeping their white trim.

Tear Down
After the paint was all done, the fun part of tearing off the old siding began. Originally, my plan was to tear off one side at a time and then put the new siding up and then go on to the next side. In practice, after tearing off one whole side of the house, I realized, it would be easier to just tear it all off. Metal siding is really easy to tear off if you don't plan on reusing it. Just get it started and pull. About the only thing you have to worry about is the sharp edges. Originally, I wasn't planning on replacing all of the soffit trim, however because of the way the siding was installed, I had to. So contingency #1 came into play (good thing we had room in the budget).

Underneath the siding was 1/8" rigid foam board. This stuff is good for insulation. although, 1/8" doesn't really provide much. Under the insulation was the bare walls of the house. Our house was built 30 years ago and the walls were made of compressed fiber board. Basically a non structural material that wouldn't hold the unless you actually hid studs. All of the homes I have helped build have had oriented strand board (OSB) or plywood walls. I decided to staple on 1/4" OSB over the entire house so that I had a decent solid nailing surface. While putting up the sheets, I made sure that I was nailing it through the fiber board into the wall studs. It wouldn't be good to have a huge section of the wall just fall off.

While tearing off the siding and insulation on one side of the house, I found where someone had been really creative before. At one point in time, there was a slight overhang of the attic portion (about 3") from the lower wall. Whenever they had put the steel siding on, they decided to make this all one plane. So they built up the wall by adding 2x6s (1-1/2 inch thick) and cutting off the sheathing from the attic portion (about 1" thick). This left the only thing keeping the blown in insulation in the attic on this portion of the house being the 1/8" rigid foam insulation that I had just torn off. Needless to say, that was a long Saturday as I had to tear the siding off and then re-sheath that wall in one day, by myself.

Residing Fun
Once all of the siding was off, I piled it up in the backyard. Eventually, I took the old windows to the dump (cost $30) and the old siding to the recycle yard (value $70). Just a quick fact, there was approximately 1300 pounds of siding on my house. After replacing all of the windows and resheathing the house, I put house wrap all around. Housewrap wasn't even required by the building codes until about 10 years ago. The stuff is great. The day after I got the house wrapped we had some decent rainstorms. I was pleased.

With the house wrapped it was time to start the siding. I had left the old starter strips on two adjacent walls after checking to see that it was level along the length. After all of the prep and trim is done, siding goes up very quickly. I had three friends help on a couple of days, but the majority of the house was done solo. For many of the upper pieces, this required some skillful balancing so that I could get the pieces in.

Since I had never hung siding before, I started at the back of the house and worked my way around, that way, I would be able to make all of my mistakes where fewer people see them. I didn't make many mistakes (that I can tell, I'm sure a professional would be able to point out a plethora). I miscut only two large pieces of siding, but was able to use the cut pieces for other places. A hacksaw and a utility knife were all that was needed.

Besides several smashed thumbs (it happens from all of the pounding), I didn't injure myself until I was almost completed. I had four pieces left to cut and was working on the roof in some hard to reach places. I decided to cut a piece in place rather than taking it down to my work bench. Mistake, I slipped with the knife and sliced my index finger, right to the bone. It bled an awful lot and I am sure my roof and front porch looked like a crime scene for a while. I momentarily debated jumping off the roof to the ground (about 12 feet) to save time, but decided it wouldn't be good if I broke a leg since I had already lost one bet with luck.

One of the nice things about getting cut with razor sharp knifes is that the cut is clean, no ragged edges, so it was easy to hold the thing together and wrap some gauze and tape around it. If I had have been in the middle of the project, I would have stopped for the night. However, I pressed on, which reopened the wound and as I was putting the last pieces up, there was blood streaming down my arm (I made sure I wiped it off of the new siding). The only thing left to do on the outside is remove the old chimney, but I'll wait 5 years until I need to replace the roof.

I finished up the soffits over the next two weeks and this is what my house looks like now: 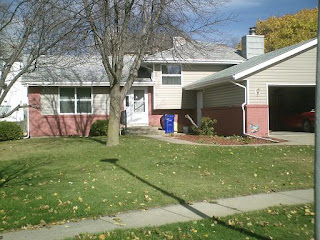 At the beginning of the project, I was going to the range regularly with my wife and friends. After taking my kid brother to the range for his first time in July, I decided to wait until I finished to go again. Sort of like a reward. So, that is the story of my house for now. I have to go load magazines!
at 7:15 PM