Halloween has come and gone and in our house Operation Candy Swap was a rousing success. Let's start with some background information.

Candy is a child's delight. While each child has their favorites, they are usually willing to consume any kind of candy. However, as we reach adulthood, our preferences end up having more prejudice. My wife and I have moved in the same direction. It has to be chocolate. Sure when I was younger, I would do stupid things with my friends like suck on multiple Atomic Fire Balls or see how many Sour Patch Kids I could tolerate at once. Those days are long gone. Now when the candy urge hits me, I want chocolate, and Lifesavers just won't do.

My parent's didn't care for Halloween much and while we got to go Trick or Treating until 12, we didn't do that much and therefore, didn't have a whole ton of candy to show for it. This was also back when everyone was paranoid about razorblades in candy so you only went to people you knew. Myself, I am indifferent towards the holiday, if it didn't exist, my life wouldn't change much at all. However, this year, my wife hatched a plan to net up as much chocolate as possible for as little financial outlay to us.

Phase 1: We didn't buy any candy. This created a net expense of $0. But we still had to give out candy to the neighborhood kids. Which led us to ...

Phase 2: This past week we attended two halloween parties where our kids were showered with goodies. We didn't have to bring any because A) my wife made great costumes so we didn't guilt ourselves into bringing candy to make up for our lack of participation in the costume department and B) we were chasing our gaggle of children each night (which as you know each child has a mind of their own and rarely do the minds coincide to the point that they want to go in the same direction). At the Wednesday party, I spent half the time scanning the area looking for Barney the Purple Dinosaur (my youngest). Which was good since she kept her clothes on. On Monday, she kept taking them off. So by Saturday, we had a large bowlful of candy. 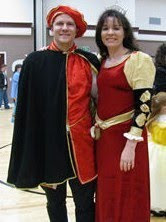 Phase 3: As mentioned before there are two types of Halloween candy. Good candy which consists of chocolate, baked goods, and licorice. And trash candy which consists of Smarties, Sweet Tarts, Jolly Ranchers, and Pixie Sticks (also known as crack in a tube for kids). I sorted the bowl of candy into the two categories. The good candy we would save and the trash candy we would give away.

Phase 4: You have to understand the neighborhood we live in. There are a lot of older couples who have grandkids and only three families with kids on our street. The next street over has only two families with kids. The couples are all really generous, perhaps to invoke the good karma so that their grandkids do well on Halloween night. As such, I have noticed that the caliber of candy given out has increased. For instance, if you know that your are going to only have 8-10 kids total come to your house, you might as well go all out and buy the full size candy bars. Likewise, even the fun size bars are more prevalent in our neighborhood and houses will give out two or three per trick or treater (making them in some instances MORE than a single full size candy bar). So my wife took our kids out to the streets to gather in as much chocolate as possible. They started early at 6pm so that they could be back in time for Phase 6.

Phase 5: I stayed home with the trash bowl of candy. Now, since Halloween is basically about extortion, I do have a little twinge of guilt about soaking the neighborhood to indulge my wife & I's chocolate cravings. But it is just a little twinge and easily assuaged. Since I know that there are only going to be 8-10 trick or treaters over the course of the night, and I don't want to have too much trash candy left over (usually it gets thrown away around February), so I give out big handfuls of candy. Now, I make sure the bowl is low enough so that the kids can see how generous (with free candy mind you) that I am being. The kids go away happy because my house gave them more than anyone else, I am happy because I got rid of the candy that wasn't going to get eaten anyway (yes, I let my kids eat candy, I just don't let them consume whole bagfuls in one sitting), the environment is better off since 5 lbs of candy will be in some kids stomachs rather than the landfill, the candy companies keep making money (which benefits me as well), my guilt is assuaged, and most importantly, dentists will have plenty of business for the next year. That is what I call a win-win-win-win-win-win-win situation. And now on to ....

Phase 6: Since my kids went out early, they are back by 8pm. This is a good thing, because the trash candy is running low from my generosity. My wife sits the kids down at the kitchen table to sort through the candy. Chocolate is saved and the kids are allowed to pick a few pieces of the trash candy to keep. The rest of the trash is used to replenish the bowl. And just in the nick of time. Naturally, as the night wears on I become more generous. When the last trick or treater came by at 9pm, I doubled the amount of candy he had in his helmet (he was a football player).

Phase 7: We netted around 30 pounds of chocolate. I divided this into 5 bags and labeled four of them January, March, May, and June. These we put in our freezer so that we don't just horde it all in one day. (I may still have to check periodically to make sure my wife isn't sneaking all of the Milky Ways).

So, we considered Halloween night a success. This strategy can only keep up for so long. I imagine over time some of the kids will tell their friends about the house that gives out handfuls of candy, which will increase the number of Trick or Treaters, therefore, economics dictates that the quality of candy will go down. Frankly, I give it 3-5 years before the neighborhood payout of trash candy exceeds the payout of good candy. In the meantime though, I'll milk it. If you do want to get a bunch of trash candy, come to my house on Halloween at around 9pm. And for those who think this was a well thought out plan hatched between my wife and I, you're wrong. It was more of a Friday night, Saturday morning type of thing where my wife mentioned that she didn't buy candy and just planned on giving out the candy from the parties. The hoarding of chocolate came naturally for both of us.
at 4:30 PM