Good Luck New York! Hope Those Gun Laws Work Out for You...

New York became the first state to pass gun control legislation since the Newtown murders.  Obama has made it known that he is signing executive orders to ... follow the laws that were already passed.  Meanwhile he is also trying to get Congress to pass some of the same stuff that New York did.  In a nutshell, New York is requiring the registration of existing assault weapons and banning their sale and transfer, and limiting magazine capacity to 7 rounds.  Plus all of the grandfathered 10+ round magazines are no longer grandfathered, but must be disposed of within a year.  All of this to decrease gun crime and make everyone safer.  Of course, the law makers don't realize that they already had an AWB ban (the new one makes it a one cosmetic feature test rather than a two cosmetic feature test - and I am not being sarcastic about that, they are cosmetic features which do not affect the firepower of the rifle at all) and a magazine limit left over from the Federal AWB and magazine limits which expired in 2004.

First point to understand.  Rifles are used in very few murders throughout the country and especially so in New York.  Based on FBI statistics, all rifles (of which assault weapons are a subset) are used in about 1% of murders.  There is enough variability from year to year that I can guarantee no affect to crime will be measured - because none can be, which is what was found with the last assault weapons ban.

Second point to understand. Magazines are used in handguns and handguns are used in the majority of murders.  However, the vast majority of murders only have one victim, and the vast majority of the time, that victim is not shot more than 7 times. (Shots tend to attract attention and most criminals don't like to draw attention to themselves in the process of committing a crime.) I make these statements without citing evidence, because I haven't come across a source for this evidence.  Which makes my statements just as supported as anyone who arbitrarily chooses a number that is going to make us safer and reduce crime. So, even if criminals decided to obey the magazine law, the law is not going to hinder them from carrying out their plans.

But, I like to see some sort of evidence to support my position, so I went and gathered data from the FBI Uniform Crime Reports.  Since gun control laws are suppose to decrease gun crime, they should have a noticeable affect on the murder rate because approximately 70% of murders are committed with guns.  The FBI has statistics going back to 1965 for NY. 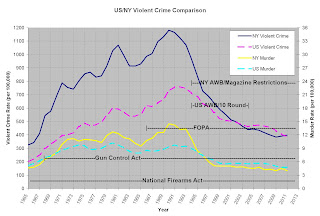 Second, on the graph I have listed the major gun control legislation with bars indicating when it was in effect.  If gun control were effective at reducing gun crimes, then we should see a drop in murders that is relationally 3 times the drop in violent crime when new gun control is implemented. We don't.  In some cases we see the exact opposite.  After the 1968 Gun Control Act, murders went up, but violent crime went up even more.  One could argue that gun control in this case resulted in more crime and more murders, not a good thing in either case.  In 1986, FOPA passed and violent crime and murders both went up again, with violent crime again outpacing the increases of murder.  More evidence that gun control had no positive effect on our crime rates. In 1994 AWB were passed and crime went down.  But violent crime (remember only 25% of it involves guns), went down proportionately more than murder rates did.  Of course there were other provisions to this bill so perhaps they were the major contributors. Except that crime rates and murder had already been decreasing for 2-4 years prior to the passage of the bill, so maybe there wasn't anything to this bill (which is what the government found when they studied the issue).  Finally, in 2004 we had an excellent opportunity for a test case.  The Federal AWB ended, but NY kept theirs (including the magazine restriction to 10 rounds).  If gun control really was effective, then we should see a dramatic difference between NY and the US as a whole.  We didn't, more on that later.

Third, murder rates have remained relatively stable since 1998.  Yes, there has continued to be a downward trend, but nothing like the upward or downward swings that the previous 30 years had had. Violent crime didn't reach a leveling off until 2004, but is also has seen relatively minor changes compared to the 30 previous years.

Fourth, while not on the chart, it is interesting to note that violent video games never even got off the ground until the early to mid 90s - the video graphics technology wasn't there before.  By the time that the market was going strong in the late 90s, murder rates were already below anything seen since 1970.  Perhaps this explains why we haven't seen a further drop, on the other hand, we haven't seen an increase either so if video games are to blame, then they certainly aren't doing too much.

Next, I expanded out to look at all of the types of violent crime.  Some quick figures about gun usage based on Department of Justice Statistics.  Guns are used to commit these crimes the following percentage of the time: murder 70%, rape 10%, robbery 40%, aggravated assault 20% (I just label it assault in the chart for simplicity).  So, what I would expect from effective gun crime prevention legislation is that there should be little to no change in rape, barely noticeable in assaults, a noticeable change in robbery, and a significant change in murder. 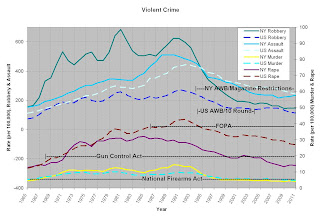 This does not match that at all.  Lets go through each one. I already pointed out how murder doesn't fit the mold for any of the gun control regulations passed.  Next is rape, the type of violent crime that least uses guns in its commission.  The US rape rate mirrors the violent crime rate.  NY tracked the US rate up until the late 1970s and then leveled off (while the US rate continued it's rise). In the mid 80's, the NY rate started a decline which accelerated with the overall decline of violent crime in the early 90s.  No evidence that gun legislation affected this in the least, which is expected.  Rape rates move independent of gun control.

While having more assaults per 100,000 than the US as a whole for 30 years, NY finally crossed under the US curve in 1995.  Of course, the results of gun control legislation match what occurred for the violent crime rate. Since 2008, assaults have climbed to match what the US rate is.  Overall, the data doesn't match the hypothesis, so the hypothesis cannot be correct. 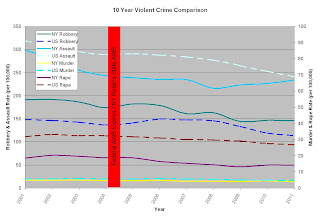 Not to beat a dead horse, but it hasn't.  The only area that NY and the US are different in is assaults, and as I mentioned before, NY is on the rise.  But, once rates get low enough, there are only going to be minor changes, so let me see if I can amplify those minor changes.  I started by taking each rate from NY as a percentage from of the US (>100% means NY rate is higher than US, etc.).  Next, I found the year to year change: negative numbers mean one of two things (both of which are in NY's favor) 1) the rate in NY is decreasing faster than the US rate (or crime is decreasing faster in NY than in the US) or 2) the rate in NY is increasing less than the US rate (or crime is increasing faster in the US than in NY).  Likewise, positive numbers mean the opposite (bad for NY compared to the US). 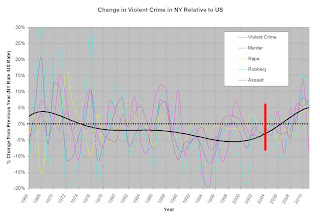 But don't we need to do something? Why? If whatever we are proposing to do has already been shown to be ineffective, why burden the government with more laws to enforce or burden the people with more laws to break. But, what if one life were saved? One life hasn't been saved. There is no evidence that gun control has helped the crime situation.  If you think that one life will be saved, show me the evidence.

On the other hand, what if I told you that there isn't a damn thing we can do about crime?  What if I said that the primary cause of crime is so completely out of our control (because the solutions are horrifying to any sane person), that there is no point in trying.  Playing around, I created the following graph that shows a pretty darn good correlation between something and violent crime. 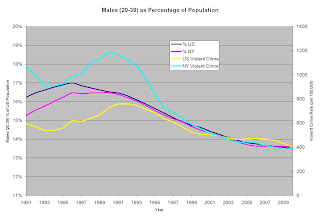 In both NY and the US, the percentage of Males between the ages of 20 and 39 is one of the best predictors of the violent crime rate.  I would have extended the graph all the way back to 1965, except I only could find reliable population demographic data back to 1981.  The crime rates are from the FBI, the population data is from the CDC's WISQARS database.

We have long known that Males disproportionately are responsible for crime.  We also know that the 20-39 age range is the most common age for violent crime offenders.  For nearly 20 years in the US (and 17 years in NY), the violent crime rate (which is a proxy for murder rate and gun crime rate) is directly predictable by the ratio of males between the ages of 20-39.  What is the solution? Lock up all men?  Kill them all at 20? Drug them all into submission?  I am talking about a stage in life that half of the population goes through for approximately 1/4 of their life.  When the number of men in this age range is a higher percentage of the population, we have more violent crime.  When it decreases, crime goes down.

Do I believe this is the major cause? I don't know, I stumbled across this while I was playing with other numbers and will have to do some more research.  This is by far one of the closest approximations of estimating crime that I have found.  It is far more predictive than the number of guns or the strength of the gun control laws.  But people don't want to be told they can't do anything.