Suicide is an issue that ends up being marginalized by those who are in support of gun control. It is a fact that about half of successful suicides in the US use a firearm (16,800 out of 33,200). Those in favor of gun control like to lump these in as part of gun violence since it helps to inflate their numbers (especially since there are only 13000 gun homicides and 700 accidental deaths each year). In previous posts I have said and in some cases shown data to identify that the underlying causes of these three problems (crime, suicide, and accidents) are not related. Therefore, effective solutions to them will be different. So let me examine suicide for a bit.

The source of my information is the WISQARS database (both death and injury) for the years 2001-2006. The first problem that gun control groups run into is combining age groups. Here is an example from the Brady Campaign:
"In 2006,16,883 U.S. residents killed themselves with a firearm, including over 2,000 young people (ages 10-24) (National Center for Injury Prevention and Control (NCIPC))."
Their definition of young people (not the NCIPC's where they get their information) is ages 10-24. I can't argue that the age range is considered young, but if that is the case, then why not include 0-24? To me, 0-19 might seem more appropriate. In any case, let's apply some critical thinking to the numbers. 2000 out of 16883 is roughly 12% of all suicides. If we assumed an even distribution of ages between 0 and 75, then the group in question (10-24, 15 years) is 20% of the age distribution. So, on the surface, it would about that this portion of the population (10-24 year olds) is less likely to commit suicide with a firearm than the population as a whole.

Now lets take it a step further, we know that people are not evenly distributed by ages, there are less 65-80 year olds than there are 0-15 year olds. So if the 15 year span, had significantly fewer (i.e. lower percent) of people than other 15 year spans. Except it doesn't. Demographic data for the US, confirms that there are about 60 million people in each 15 year age span up to about age 60. After age sixty, the number decreases by about 20-30% for every 5 years. In other words, the 10-24 age range actually represents more than 20% of the population, so they are even less likely to commit suicide (in spite of the horrific teen years) than the rest of the population.

Let's look at it another way, why not include all young people, everyone from 0-24. Does anyone think that 0-9 year olds will add a significant amount of suicides to the 2000 there are already for 10-24 year olds? I didn't think so. I would add 50 just to be fair. So 2050/16,883 , still 12% are now committed by something north of 33% of the population. That would mean young people are still even less likely to commit suicide. In case you haven't noticed, it is looking like suicide is not primarily a young person problem. Whereas the majority of gun crimes are committed (and perpetrated against) 15-24 year olds, not even a significant portion of suicides (only about 12%) occur to people in the "young person" category. This tells me that this argument is primarily a sympathy plea. We all look at children as innocent.

At least the Brady Campaign doesn't say that 24 year olds are children, but I wonder what the stats would look like if say the 20-24 year olds were removed. Good thing they included the statistics here. So, almost 1300 of the 2000 firearm suicides are from the 20-24 year old age group. Knowing this, it really puts a much different spin on suicides. 0-19 year olds ("children") make up more than 25% of the population as a whole. However, they are only responsible for 4.5% of firearm suicides. Or they are 5 times less likely to commit suicide with a firearm than the population as a whole. To me, that sounds like this age group is emminently trustworthy with firearm (but that would be committing a logical error by not accounting for the availability of firearms to this group of people, so I won't conclude that). What it does tell me is that compared with the rest of the population children committing suicide by firearms (and committing suicide in general) is not a major problem. Tragic? Absolutely. But do we need to take drastic measures for every tragic incident? If so, then life will come to a standstill as we try to "prevent" tragic incidents.

The next major problem that gun control groups make is trying to simplify a complex issue and apply a "solution" that won't fix anything. One of the solutions to "children" committing suicide with firearms is safe storage laws. In a nutshell, safe storage laws require some method of securing firearms such that "children" wouldn't be able to get to them. In some states with these laws, parents can be held criminally responsible for crimes (including suicide) that are committed with firearms they didn't "properly" secure. As we have seen above, less than 5% of firearm suicides are committed by children. Since the age range of 0-19 has an overall suicide rate per 100,000 of 2.26 and a firearm suicide rate of 1.02, someone in the 0-19 category is more likely to choose a method other than firearms to commit suicide. So, will "safe storage laws" prevent suicides? Most likely not, other means are available, and just as effective. They definitely have the potential to ruin a family more by charging the parents with criminal negligence when they are already dealing with the suicide of a child.

So, if suicide is not a "youth" problem, where should our efforts be focused? One of the things that the quest for "equality" has done is blur and in some cases erased the idea that there are differences in people. Men and women are not alike. Blacks and whites are susceptible to different genetic diseases. Old and young act differently based on any number of factors. Part of coming up with solutions to problems is to realize that we are not all the same. The second is that government is rarely the solution to any problem. You can't legislate solutions. Government "solutions" could be described as a band aid, and more likely as a butterfly band aid. It may hold the wound shut, but it won't stop the bleeding, and it definitely doesn't fix broken bones.

Here is a simple chart of who is committing suicide and who is attempting to commit suicide broken out by gender and age. Solid lines use the left axis, dashed lines use the right axis. 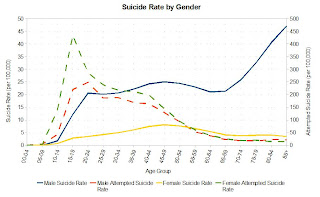 Some things to take away from this graph. First, males are more likely to attempt suicide and commit suicide. The greatest disparity is in committing suicide though. Besides a narrow time period (15-19) males and females attempt suicide at the same rate. However, males are far more likely to commit suicide than females, 5 to 10 times more likely. Second, young adults (15-24) attempt suicide more often than the general population, however, it also results in injury rather than death at a higher rate. This would seem then to be a plea for attention or help rather than being serious about ending one's life. Third, there is a disconnect between the stable rate of attempted suicides (25-44) and the stable rate of suicides (20-65). As a part of this it should also be noted that there appears to be a peak in suicides around age 45-49 (mid-life crises?) for both men and women. Fourth, after age 44, men and women are nearly identical for attempted suicides. However, fifth, after age 65 men and women vary greatly in committing suicide: women have a stable to decreasing rate, men on the other hand have a steadily increasing rate.

Suicide as a method of death, isn't even an issue until someone is into their 20's. That doesn't mean we should ignore it, but compared to the rest of the population, our focus should be elsewhere. Let me end this part with one more graph. The Lethality Ratio. The lethality ratio is the rate of suicide (death) divided by the rate of attempted suicide (injury) to determine what group is more likely to die. 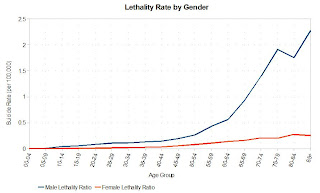 Clearly, older males are far more adept at killing themselves. This is one reason why whenever someone brings up suicide as a reason for more gun control, especially targeted at "children", I know they are disingenuous. They are only trying to pull at heart strings to get their power trip. All the gun control in the world is not going to lower the suicide rate. Japan and Europe are, unfortunately, perfect examples.