"a violent world that disproportionately targets women" - Weer'd Beard said this on a comment on another blogger's website and I had to ask myself: "Is violence disproportionately skewed towards women?" Seems like a rather easy question to answer so I went searching.

The Bureau of Justice Statistics compiles this type of information from their crime victimization surveys. On the most basic level, one could say no based on this graph:

Violent crime (murder, rape, robbery, assault) has been committed against males at a higher rate since at least 1973. However, looking at the graph and examining the underlying data, one can see that males have experienced a sharper decline (63%) than females (52%). Reviewing data from the 2006 and 2007 Crime Victimization surveys one finds that the rate between males (22.5) and females (18.9) has narrowed further. So, in the next 5 years we might see that violent crimes are committed against females at a greater rate than males.

So initially, I'll say that I disagree with Weerd, with some stipulations. 1) I'm looking at data from the US. 2) The trend indicates that Weerd will be right in a few years (so he may just be ahead of his time). If I stopped there, this would be an uncharacteristically short blog. So I won't. Perhaps my initial disagreement is wrong.

Based on the violent crime rates, about 2.7 million are committed against men and 2.4 million are committed against women. While not identical, it should be close enough to find any disproportionate amounts. The two impacts that I want to look at are deaths and injuries. So, let me change my original question to "Does violent crime cause a disproportionate number of deaths and injuries to females?" I'll use WISQARS as my source data for the years 2001 - 2006 (reason being that they have deaths recorded through 2006 and their comparable injury information only goes back to 2001). It should be noted that the death information will be more accurate since it is gathered by counting the total number of deaths. Injuries is done using a survey method and extrapolating to the entire population. As usual, my conclusions will come at the end (hence the word conclusion), and I'll be more than happy to tell you if I am wrong. So, in summary to start, based on the BJS chart, for the present time, I think Weer'd is wrong. Let's see who is right?

Violent crime as defined by the government consists of murder, rape, robbery and assault. WISQARS has a dataset for fatal injuries that has a subcategory of homicide. As part of the non-injury dataset, it has subcategories for sexual assault and other assault. I'll use the sexual assault as a rough approximation of rape injuries. The other assault I will use for the robbery and assault category. These categorizations are not perfect, but we rarely get to do a lab experiment when it comes to crime (those pesky criminals don't always cooperate and it is hard to get volunteers to be the victims). I'll then see how the comparative WISQARS rates match up to the BJS rates. A couple of things that I won't be looking at is the psychological cost of these crimes and the monetary cost of these crimes.

To begin I used the homicide and assault categories to gather information on cut/pierce, drowning, fall, fire/burn, firearm, poisoning, struck by/against, suffocation, and motor vehicle. Then I calculated the comparative rate between the two as a percentage (female rate/male rate * 100). If the percentage is greater than 100% than it disproportionately affects females.

To begin here is the graph of homicides: 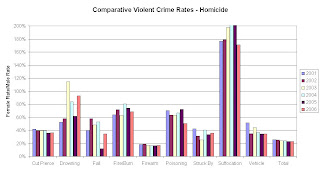 The first thing that caught my eye was that only suffocation and drowning had any values above 100%. From a logical standpoint this makes sense. Murder by suffocation and drowning are brute force methods. There are no force multipliers. A rope may be used around someone's neck but this does not necessarily multiply the force. Given the fact that the average male has more upper body strength than the average female and that predators (criminals) tend to target the weak, it makes sense that brute force methods would disproportionately affect women. However, as can be seen from the total, homicide statistics are driven by firearm homicides which disproportionately affect men (five times the rate as women). Looking at the BJS rate comparison from 2005 the comparative rate is 26%. This is very similar to what I found from WISQARS.
Now for the assaults (which would be robbery and assault): 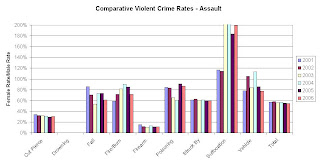 Again, the overall shape is similar to the homicide chart (minus drownings, it is hard to get injured from drowning). Vehicular injuries has a couple of years where women are about equally affected (100%) which is curious to see since, there wasn't the a similar comparative rate for homicides. The total is driven by the Struck By/Against category since they account for nearly 10 times the injuries as the next closest (Cut/Pierce). What these two graphs combined tell me is that Weer'd intention with his comment may be the force disparity that women have in unarmed combat. Suffocation is an indicator of this. Going up to my two assumptions in the preceding paragraph, an average male preying on an average female is going to have a strength advantage. A female preying on another female is going to select her prey so that she has a strength advantage. So if this was Weer'd intention, I would have to agree, however the way he worded it originally doesn't easily lend itself to that conclusion. Looking at the BJS comparative value for 2005 it is 62% when combining robbery and assault numbers. Once again this is similar to the numbers I calculated from WISQARS.

And the last graph Sexual Assualt or Rapes:

The first thing that should be obvious is the scale. Rape and sexual assault disproportionately affect women in a big way. That isn't news to anyone I hope. Further, injuries primarily occur in the struck by/against category. This also shouldn't be a suprise. The BJS found that only about 7% of rapists use weapons during their crime. The vast majority are just predators seeking out easy prey that they can use their strength disparity. Looking at the comparative rate for the BJS it is 1400%. This is higher than the values I calculated, but then again, they are surveying all rapes and sexual assaults while WISQARS is only looking at injuries. Still, as far as the order of magnitude goes, they are very similar.
Overall, violent crime rates are driven by assaults. There are 10 times as many assaults as robberies, 4 times as many robberies as rapes and 20 times as many rapes as murders or 800 times as many assaults as murders. Of the four categories of violent crime, women are disproportionately affected by rape. However, the trend of violent crime victims by gender appears to indicate that we may be seeing more of the violent crime targeted to women in the near future. So in conclusion, I still think Weer'd is wrong, for now.
That all being said, I don't think women (or men for that matter) should sit back and pretend crime doesn't happen. On the reverse side, don't paralyze your life because of what is going on in New Orleans or Chicago. Looking at the Crime Victimization reports can tell you a lot of things.
1) Women are 50% more likely than men to be victims to someone they know (family or friend). Lesson: Know your friends and family.
2) 25-34 year olds are half as likely to be victims of violent crime as 12-24 year olds. The rate drops an additional 25% for 35-49 year olds, an additional 33% for 50-64 year olds and finally an additional 80% for those over 65. In other words, a 65 year old has only 5% of the risk of being victim of a violent crime as a 20 year old. Lesson: Relax as you get older.
3) Never married and divorced people are 3 times as likely to be victims of violent crime as married or widowed people. Lesson: Get married and stay married.
4) Urban residents are 50% more likely to experience violent crime than suburban or rural. Lesson: If you can, get out of the city.
Bottom line. Choose first to not be a victim. Take the necessary steps to not make yourself an easy prey.
at 6:00 PM