In Part I I started to explore who was committing suicide and why gun control efforts to use this issue to support their cause were worthless. One of the major themes I mentioned is that men and women are different. This should come as no suprise to anyone. Even a five year old from the movie "Kindergarten Cop" knows this. So let me look more at how people choose to commit suicide and what it might tell us. Some things to remember from last time, men commit suicide more than women. Older men commit suicide at a much higher rate than any other group. My goal here is to show that suicide is a much larger issue than gun control groups make it out to be and simple "solutions" like limiting access to guns are not going to affect it.

Some have argued that guns mixed in with suicide result in more deaths. Somehow, guns are more lethal than other methods of suicide. I introduced my lethality ratio in the last part. This shows which methods of suicide end up being the most lethal. 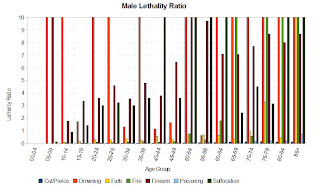 Clearly, drowning and suffocation are far more effective methods than firearms. Even fire is more effective in the later years, the group that has the highest suicide rate. Are women any different? 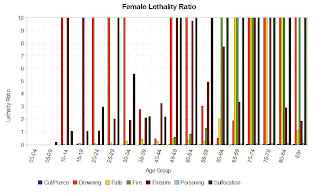 Similar but not the same. drowning and suffocation are almost univerally lethal across all groups. In later years, fires and falls become more lethal. Firearms are as lethal for some age groups, but by and large other groups have less lethality than males.

Overall, what this is telling me is that there are already plenty of other methods that people use to commit suicide that are are just as lethal or more lethal than firearms. Removing them will not decrease the suicide rate.

What are the major methods people use to attempt suicide? Poisoning and Cut/pierce. This is telling because if we are going to propose "limiting access" to some object as a means to decrease suicides, then limiting access to poisons and sharp objects is an impossible task. They are literally everywhere and completely unregulated. While poisoning may have a relatively low lethality rate, the fact that orders of magnitude of people attempt to use it results in a significant number of suicides. For women, more suicides occur from poisoning (1.69 per 100000) than firearms (1.43 per 100000). The vast majority of attempted suicides are by poisoning for men (63.01) and women (96.32). The number two method, cut/pierce, is a distant second (23.71 men, 25.29 women). Firearms is an even more distant 3rd. So any attempt to limit the methods of suicide is going to be fruitless. We live in a world that is full of things that are dangerous. The average household has enough chemicals that if distributed appropriately could kill 10,000 people.

Serious researchers of suicide know all of this. Limiting access to methods of suicide are only effective if someone is with the suicidal person - it is a full time job. That is why they advocate not leaving someone alone who has expressed suicidal tendencies. Stay with them constantly, and get professional help. In that order. If you believe that "limiting access" to objects through legislation is effective, continue living in your fantasy world. Just don't be surprised when people like me call you out for the waste of resources you have perpetrated and let you know that you haven't saved a single life.
at 11:30 AM