Death of the Cannon

In 2009, I built myself a cannon.  You can read about it here, here, and here.  Over the last three years, it has brought much joy to people.  It was used at a family reunion, to celebrate holidays, and just for fun in the backyard with friends.  The cannon was first shot off on January 1, 2010.  It had its final shot on December 31, 2012.  Three years of black powder goodness.

I was down at my brother's place, and we had decided to make some potato guns to entertain the kids.  We used some PVC left over from construction of his house and the remainder of my other cannon that I had never finished.  After about 30 minutes of work we had a 3" shooter and a 2" shooter.  Later that afternoon, we took the kids (age 5 to 13) out to fire off some spuds. 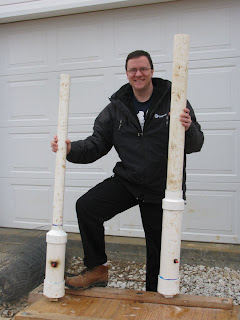 One bottle of hairspray and a 5 lb sack of potatoes is a lot of fun.  The kids were practically beating each other up for a turn to press the trigger.

On New Year's Eve we planned a big night of exploding goodness.  It started with a trip to the grocery store, oranges would fit, along with another sack of potatoes.  To stay with the vegetable theme, for the cannon I selected a large onion, a grapefruit, and something from the lettuce family.

Then it rained that afternoon.  By evening it was still drizzly.  We decided to do it anyway, blowing stuff up at night to celebrate the new year is a time honored tradition in America that a little precipitation is not going to get in the way of.

So, we started with some stuffed animals.  The cannon performed beautifully as usual and the kids were pleased to ring in the New Year.  Then the rain started more, things were getting wet and icy (it had snowed earlier in the day).  So, I decided one more shot, the lettcue thing.  I loaded up 6 tablespoons of blackpowder, stuffed in the wadding, and then the lettuce.  It fit snugly, but not quite as snug as the stuffed animals do. 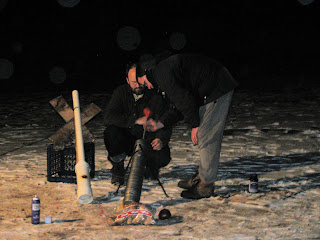 In conjunction, my brother and I decided to light off the spud guns at the same time.  Did you know that the explosion in a spud gun is bright enough to cause the gun to glow? It is a great sight at night (although slightly ennerving at first when you realize that this is about 3/16" to 1/4" of white plastic that is glowing momentarily).  Everything was loaded up, and I lit the fuse on the cannon.

The sound reverberated off of the hills and sounded only slighly quieter but much deeper than a shotgun blast. The blast had knocked the cannon backwards and it skidded along the ground until it hit the deck.  It was pouring down rain now, so I left the cannon out until the next morning and just grabbed my explosion tool box.

The next morning when I went out to retrieve the cannon, I found this: 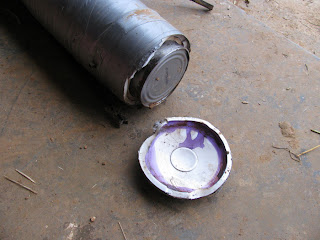 That final blast had literally blown the end off of the cannon.  It wasn't that there was too large of a charge, I had put up to 8 tablespoons of powder in it before. But in retrospection, there were three possible contributing factors.

1) The angle at which the cannon was aimed. Since I am using this for enjoyment of friends and family, I like to have a nice arcing shot (more like a mortar than howitzer), I I usually set up the cannon at a 60-70 degree angle.  This allows the ground to be used as a backstop and absorb much of the recoil.  Since the cannon was seen skidding across the ground after the shot, it is entirely possible that I had a shallower angle, which would mean that the recoil forces could send the cannon flying backwards.

2) The cold weather might have made the material brittle.  I had set up the cannon earlier in the afternoon, so by the time we were shooting it, it was probably at 20- 30 degrees.  The break was a clean circumferential break, it didn't shatter, so that is telling me that the force of the combustion chamber acting backwards caused the break.  If the combustion chamber couldn't contain the pressure, then I would expect the whole thing to blow up, or at least have evidence of shattering the PVC shell.  There was no evidence that this happened.

3) The lettuce probably had way more friction than a teddy bear.  Plush stuffed animals with their cotton/nylon fur glide out of the tube.  Lettuce leaves tend to grip the sides and only move on brute force.  I know this from ramming stuffed animals down the tube.  Once I get them moving, as long as I apply pressure, they continue to move (i.e. I just have to overcome starting friction).  When putting the lettuce in, there was comparatively less force required, but each push only moved it down the barrel a little ways.

Of course, it may have been the deck that arrested the movement which ultimately caused the cannon to fail.  But, that is life.  On to my next adventure.
at 6:00 AM