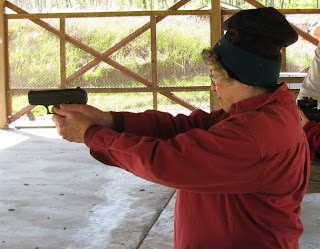 I found out this afternoon that my friend Rosemary passed away this morning after being diagnosed with cancer six months ago. I met her a little more than three years ago. Two years ago I began to help her and her husband rebuild their home which had been flooded. She was involved in her church, in the community, and raised a great family.

Last year, I took her shooting for the first time in her life at the age of 75. She was about 5' 2" and weighed maybe 110 pounds with all of her winter clothes on. While others were starting off with a .22 LR, she picked up the 9mm and asked how to load it. And then continued to shoot it after commenting that "That kicks a little." She continued on and tried out the AK-47, the SKS, the Saiga-12, and the Mosin-Nagant. Her comment at the end, "That was fun, I'd like to do it again."