In looking at decisions, we should examine the costs.  Not just the monetary costs but other implications as well.  Banning and confiscating guns might result in less people killed and injured by guns - depending on the extent of number of guns affected. Unfortunately, we can't look at just the number of gun deaths and gun injuries, unless one believes that this is the sole cause.  If on the other hand people are the cause, then a fraction of the gun deaths and gun injuries will be replaced with other deaths and injuries.

Defensive uses of firearms need to be taken into account.  This area of research is very hazy.  There are no police reports that have a checkbox for defensive uses of firearms.  So now easy statistics to gather.  Several groups (including government agencies, pro-gun groups, and anti-gun groups) have done studies and surveys to determine the number.  The only thing they agree on is that defensive gun use happens.  Numbers vary from 100,000 per year to 2.5 million per year. One clear problem with all of these studies is that defensive gun use is not universally defined.

Obviously if someone discharges their weapon in deterrence of a crime, this should count.  Drawing a weapon on a crime in progress should count (although, then what may have been a murder might now just be an assault - the murder rate goes down, but the overall violent crime rate does not). What about drawing a firearm on a crime that has not been committed? Say someone pounding on your front door in the middle of the night? Maybe it is a criminal, maybe it is just the drunk guy from next door who forgot his keys. Has a crime been averted?  What about walking down the street and your jacket gets blown by the wind, exposing the concealed weapon at your back? No one sees this except the perp who was trailing you and planned on asking for your wallet in a couple minutes.  He decides to bother someone else. Is that a defensive use - one that you didn't know happened?

Murder is the one crime statistic that can be reliably compared between countries.  England has decent records to show what the homicide rate has been historically. Starting back in 1200, England had a homicide rate that dwarfs what is found in America today, and this is before guns were invented. This in no way is to imply that guns were the only thing that decreased the crime rate, but it is a starting point to counter the idea that guns are causing the high murder rate.  The same source traces the homicide rate through the centuries.  The development and proliferation of firearms does not appear to affect it.  There is no uptick in murder when the rifles or handguns are developed.

England's foray into gun control did not really begin until early in the 20th century.  Homicide rates continued to decline in England throughout 1800 (as shown on page 99 Table 1 of that source).  By 1970, the UK gun laws looked drastically different from the US gun laws. There was very little firearms ownership, and firearms were tightly regulated. So comparison between the UK and the US is informative. 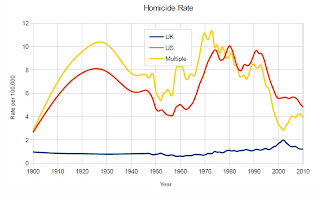 Using the sources from this wikipedia page, I plotted a comparison of the US and UK with the addition of a multiple line which represents the magnitude of difference between the US and UK rates. The first thing that should be noticed is that England has ALWAYS had a much lower homicide rate than the US. Furthermore, it has remained very stable up until the last 40 years.  Major gun control legislation was passed in 1920, 1937, 1968, 1988. and 1997. Anti crime legislation in 2006 dealt with airpowered weapons since real firearms were already regulated to as close the maximum extent possible. There is no decrease in 1921 or 1938.  The years following 1968, 1988, and 1997 all saw increases in crime. In particular, this study shows that from 1997-2007 gun crimes, went up. The gun control that the UK has implemented over the last 100 years has not affected the murder rate (at least not in a good way) at all.

For the US, major gun control legislation was passed in 1934, 1968, 1986, and 1994.  Additionally, one piece of legislation expired in 2004.  The years following 1934 and 1994 saw a decrease in the murder rate, however, the decline started in the year or two before the passage of legislation. The years following 1968 saw and increase in the murder rate, but again, the rate had been on the rise for several years.  1986 is interesting since rates had been stable for the couple of years before 1986, the rate dipped for one year in 1987 and then rose above the previous rates the the following years. 2004 fell in the middle of several years where the rate stayed level, and then it fell some more.  Once again, gun control legislation (less draconian than the UK) appears to have had no affect.

Finally, the last thing to notice is that the multiple between the US and UK has been falling and is at the lowest levels in the last 100 years.  In other words, the US is becoming less homicidal compared to the UK. (That isn't to say they ARE less homicidal yet, although if the trend continues for the next couple of decades it very well could be.)

Using sources from Eurostat and the FBI, the trend in violent crime and total crime can also be compared.  The actual rates shouldn't be compared since the definitions of crimes differ between the countries. 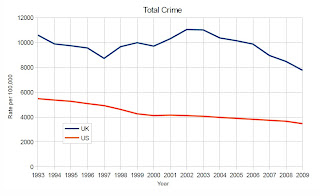 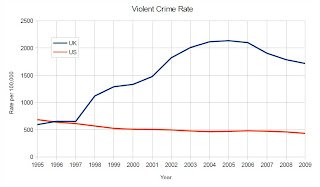 Since the early to mid 90s, the US has seen a steady decline in both violent crime and total crime.  The UK has not been so fortunate.  Total crime overall has declined, but it appears that violent crime is on an upswing.  This could be related more to how the crime is reported.  One thing remains clear, the % decrease in crime (total and violent) in the US has been more than in the UK.

Gun control has enforcement costs.  If it is ineffective because it doesn't lower crime, then what justification is there for it? Less people killed by guns (even though there aren't necessarily less people killed in total)?